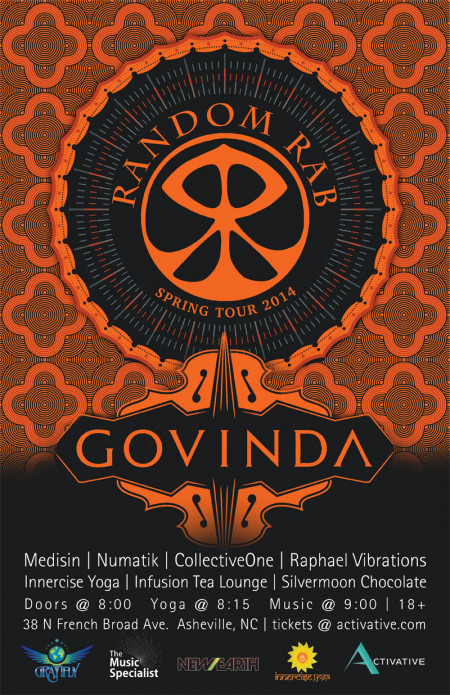 ((({{{ Random Rab }}})))
Emerging from his own distinct corner of the West Coast electronic music scene, Random Rab offers a powerful and unique contribution to sonic exploration. Often referred to as “The Master of Emotion” his music is patently beautiful and melodic. With diverse influences ranging from trip-hop, classical and Arabic to bass driven compositions, his songs are considered anthemic and timeless. As a multi-instrumentalist and singer, his tracks are organic, uplifting and stand on their own as a distinct genre. Listeners of all types of music can find something they can relate to in this sound. He has toured extensively across North America, including tours with Bassnectar, Shpongle, Beats Antique and headlined several festivals across the country.

There is no doubt that Rab understands a multitude of musical styles. He has been the front man of a heavy metal band, toured as a classical trumpet player, played bass in a country music band, was a scratch DJ for a jazz fusion project, was the singer for a rock band in Mexico and has collaborated with countless musicians of all styles. From acoustic performances in the Himalayas to rocking packed clubs in New York, Random Rab has found a way to connect with people of all kinds.

With a dedicated fanbase born from the San Francisco underground, Random Rab has become a Burning Man legend known for his sunrise sets that have now become one of his most sought after performances. His current popularity can often be traced to his breakout album, The Elucidation of Sorrow.. This album firmly established him as a recognizable force in the electronic music scene. His 4th album aRose, catapulted him into the state of momentum that is now taking hold internationally. His latest studio effort, Visurreal debuted in the iTunes Top 10 Electronic Charts as well as in the CMJ RPM Top 5 with several #1s on radio stations across the country.

Sometimes performing solo and at other times featuring collaborative musicians, the live experience is focused on a high quality translation of sound that is simultaneously sexy and psychedelic.
https://soundcloud.com/random-rab

(((({{{ Govinda }}})))
Govinda is the alter ego of Austin-based producer/composer Shane Madden. He began studying violin and composition at the age of eight and went on to study classical violin at the University of Texas, where he fell in love with electronic music production. It was in Madden’s pursuit of his gypsy roots that he opened his ears to music from around the world. From experiences learning violin from mysterious masters on his journeys across the globe and his passion for modern design and technology, the current sound of Govinda was born.

Govinda has played with Thievery Corporation, Tipper, Bassnectar, Shpongle, Cheb I Sabbah, STS9 and many more and has been featured on over 25 compilations such as Buddha Bar II, Asian Travels II, and Nirvana Lounge, selling a combined 400,000 copies. Govinda has played at numerous festivals throughout North America including Coachella, Lightning in a Bottle, Sea of Dreams, SXSW and many others. Govinda’s music has been licensed on shows like “Roswell” WB, “Road Rules” MTV, and “Queer Eye for the Straight Guy” Bravo as well as many independent films.

The Govinda live show is truly a multi-sensory experience that features professional dancers, live projections, resonating vocals and a sonic soundscapes. His live experience is full of vibrant energy that plays to its crowd. Govinda performs on Ableton Live accompanied by classical violin. Govinda is currently touring in support of his latest album “Resonance” which was released independently in September 2012.
https://soundcloud.com/govindamusic

((({{{ Medisin )))}}}
Coming at you with full on pure psychoactive intuition.
From the magical mountains of Asheville,NC. For the past 15 years Medisin has been playing Festivals, FullMoon Gatherings and Underground Parties around the country. All of which helped create his musical style to open up to a vast library of fresh beats from around the world . Ranging from PsyDub, GlitchHop, PsyTrance, DubStep, PsyBreaks, Electro and whatever else that taps into the ever evolving conscious dance music culture.
https://soundcloud.com/medisin

((({{{ Numatik )))}}}
Summit Jaffe, as Numatik, offers fresh and timelessly deep sonic expressions of love and gratitude. Nestled currently in the ancient mountains of Appalachia, Summit has been digging deeper and deeper into his creative outlets in a mission of self-discovery and unfoldment. After experimenting with and learning the intricacies of analog synthesis at a young age, he became enthralled in the infinite creative potential of digital production. Through spiritual practices, ancient plant medicines, and the synchronized cosmic flux, Summit has stepped gently into deeper awareness of what it means to be here on Earth.

Numatik is a project that brings together his spiritual awareness and tactical production knowledge, resulting in deeply connected sonic landscapes, pulsing with ever evolving freshness. By the cultivation of sacred sonic space, Numatik transforms dance floors into containers for free expression of the divinity within us, guided by music infused with the organic sounds of breath, natural sounds, shamanic vocals and occasional ethnic instrumentation.
http://soundcloud.com/numatikrecordings

((({{{ Innercise Yoga )))}}}
Designed to balance the body, clear the mind, and activate your awareness. This asana practice will enhance and expand not only your strength, but your center with a playful flow to get you juiced up for a night on the dance floor!