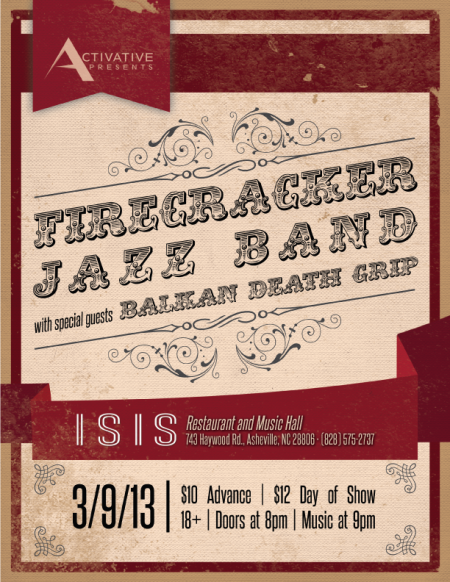 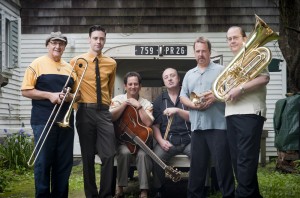 In hundreds of performances since 2003, the Firecracker Jazz Band has played everywhere from street corners, speakeasies, jazz festivals from coast to coast, beer-soaked dance halls, Bonnaroo and the Kennedy Center. Based in the beautiful confluence of plentiful music and majestic mountains that is Asheville, N.C., a performance by Firecracker Jazz Band is not to be missed. With jubilant vigor that spills from the stage to the streets, these six musicians revitalize traditional jazz with unbounded energy. In paying homage to the pioneers of early 20th Century Jazz, including that of Dixieland and New Orleans, Firecracker Jazz Band carries the torch that was once lit by such greats as Jelly Roll Morton, Louis Armstrong & Bix Beiderbecke.
So bring your dancing shoes and remember: Speak Easy, Dance Hard.

Balkan Death Grip is WNC’s answer to the call for balkan and gypsy dance music. Comprised of Jeff Loops on upright bass, Trevor Grassi on accordion and Matthew Heckler on violin , this trio can vary from traditional gypsy music to fast paced klezmer in the blink of an eye. Wether you prefer a slow waltz from France or a shtetl shaking romp from the balkans, this is a trio not to take lightly.